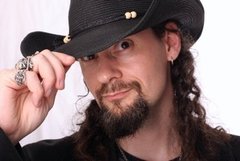 Steven and Robert first met back in the mid-1990s. They discovered early on that they both shared a love of the conjuring arts and all things creative. An immediate friendship was established that has lasted to this day.

Born in Nova Scotia, Steven has been building and designing props and scenery since he was sixteen years old. He started by painting billboards for The Festival on the Bay in his hometown of Glace Bay. Since those early beginnings, Steven's career has taken him all around the world. He has travelled from Halifax to New York, Las Vegas, Monte Carlo and China.

Steven has designed projects for many organizations, including DreamWorks, Audi, Caesars Palace, Cirque du Soleil, Harley Davidson, M&M's World Las Vegas, and The Second City. Currently, Steven is the designer for Sands China Ltd. in Macau. He is responsible for designing props and scenery for all five of the company's luxury hotel-casino properties.

Steven is one of the creative consultants for Robert LAMAR's The GIFT. If that weren't enough, Steven is also the set designer and builder.