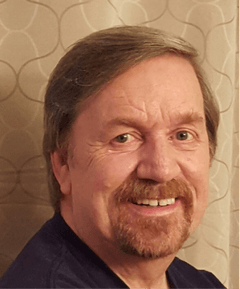 The essence of Rick Walker has audibly pervaded Robert LAMAR's productions from the outset. His old-school, rich, deep, sultry voice welcomes all prior to the commencement of every show. In fact, the first thing Robert LAMAR hears before walking through the curtains onto the stage is Rick's vocalizations. Hmm! Is it a case that Rick is better to be heard rather than to be seen? No, but he does have a great voice.

Born, raised, and married in Dartmouth, Nova Scotia, Rick started off working part-time in his family's well-established business, Walker's Printing, before later becoming shareholder, then owner/operator. During this time, Rick earned a Business Administration degree and, as if that wasn't enough, The Voice also received a Broadcast Diploma where he ventured into the broadcasting industry for a stint. During this period he recorded various commercials and public service announcements. Now retired—and when he isn't lending his talents to Robert LAMAR's productions—Rick, on occasion, will perform voice-over work.